Shah E Alam, Ahmedabad
Farzeen is a Shah E Alam, Ahmedabad based Mehndi Artist in India. Farzeen, since her childhood, has been fascinated by mehndi and art is what she has eventually evolved and grown up with. She was appreciated and supported by parents and even teachers and since school time Farzeen has shown her love for this ancient art. She is a social being and loves to meet and interact with new people. Her art is her way expression and that is what makes her different from all other artiest our there. Speciality:
[email protected]
7405884946
http://farzeenmehndi.com
Farzeen Bridal Mehndi Artist Designer, Mohammadi Society, Danilimda, Ahmedabad, Gujarat, India
₹80.00
farzeen bridal mehndi art in shah-e-aalm,ahmedabad based professional mehndi artist in india .
₹80.00
₹5,000.00
182 Views
0 Rating
0 Favorite
0 Share 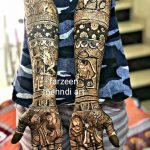